My laboratory at the Department of Cancer Systems Imaging at the University of Texas, MD Anderson Cancer Center is exploring novel ways to utilize Magnetic Resonance Imaging (MRI) to create more detailed metabolic and molecular imaging studies by employing hyperpolarized, non- radioactive carbon 13 (13C) and nitrogen 15 (15N) labeled compounds and silicon nanoparticles (SiNPs) to tag specific metabolic and biochemical sructures and functions that are altered in cancer. This is a collaborative research endeavor which involves many laboratories and research groups across the institution, Rice University, University of Houston and Texas Medical Center.

Magnetic Resonance (MR) Imaging is a technique utilized in the clinic every day. In conventional MR, anatomical images are produced by using the signal from the water in our blood and tissues for detection. Images and the exact metabolites within a specific area of the body can also be detected using MR. However, due to the inherent Boltzmann Distribution there is a low signal to noise ratio (SNR) in conventional MR and many diagnostic techniques become unreasonable in the clinic because of the amount of time needed for the examination. In addition, magnetic resonance imaging (MRI) or spectroscopy (MRS) remain expensive, with low patient throughput (only 15-20 patients per day, per instrument), and are limited by patient tolerance. A technique called ‘hyperpolarization,' where the nuclear spins are artificially moved out of the traditional Boltzmann distribution, may provide an elegant solution to all of these problems. Hyperpolarized MR is a non-toxic, non-radioactive method for non-invasively assessing tissue metabolism and other physiologic properties. Hyperpolarization allows for a >10,000-fold signal enhancement relative to conventional MRI or MRS. After hyperpolarization, the signal enhancement can be retained on the metabolites of the hyperpolarized molecules for several minutes. Many laboratories, including ours, are working on techniques to extend this relaxation time so that more detailed metabolic and molecular imaging studies can be considered.

My laboratory is involved in three primary areas of research:

Real time metabolic MR imaging with hyperpolarized 13C and 15N labeled non-radioactive compounds. The goal of this research is to use mostly endogenous compounds to track different metabolic pathways in vivo in real time. To date, the most well-characterized hyperpolarized 13C compound is pyruvate. The utility of hyperpolarized pyruvate in metabolic imaging has been explored extensively, and the first study in humans was recently concluded at the University of California, San Francisco. Hyperpolarized pyruvate can be used to follow the metabolism of pyruvate to alanine, lactate and bicarbonate. The rate of hyperpolarized lactate production has been revealed as a marker for cancer in multiple animal studies. In fact, M D Anderson Cancer Center is now in the process of acquiring a clinical hyperpolarizer, SPINLab polarizer to be used for a pilot clinical trial with hyperpolarized pyruvate early next year. This presents an exciting opportunity to realize imaging-based personalized medicine in cancer patients. Our group is also interested in several other metabolic compounds, including the Krebs Cycle intermediates succinate, fumarate, glutamine and alpha-ketoglutarate, and have recently explored the CRIMP (Chemical-Reaction Induced Spontaneous Polarization) technique to probe multiple biochemical functions simultaneously with multiple hyperpolarized agents. Imaging and MR metabolic profiling with these hyperpolarized molecules have opened up myriad potential applications ranging from detection of early stage cancerous tissues, determination of therapy efficacy in real time, to accessing vulnerable plaque in coronary and carotid arteries as well as establishing tumor margins after surgical treatment. In collaboration with other laboratories in MD Anderson, we are also actively exploring the possibility of performing real-time imaging of cell death and pH in vivo. Real-time metabolic MR imaging may establish an entirely new regime wherein the local status of tumor metabolism is interrogated on the time scale of seconds to minutes with unprecedented MR sensitivity.

Real-time molecular MR imaging with hyperpolarized silicon nanoparticle (SiNPs) functionalized to target specific biological functions and structure. Hyperpolarized SiNPs have opened the door for targeted functional imaging by MR that used to be in the realm of PET and SPECT. Due to the simple surface chemistry, the hyperpolarized SiNPs can serve as a nanoplatform, allowing a variety of targeting agents and potentially therapeutic drugs to be loaded onto the particles, which enables real-time targeted theranostic imaging studies with an imaging time window of roughly one hour. We hope to use this emerging hyperpolarized imaging platform to a) detect certain protein expressions exclusive to pancreatic cancer stromal cells, thereby detecting pancreatic cancer at an early stage by effective lesion size amplification, b) seek out precancerous polyps via MR colonoscopy with MUC1 antibodies functionalized SiNPs, and c) distinguish inflammatory tissue from cancerous lesions with aptamer functionalized SiNPs. Taking advantage of the unusually long-lived hyperpolarized signal, we are also actively exploring the possibility of performing MR guided catheter tracking with silicon particles.

High resolution MR metabolomics of animal and human tissues. To complement the real-time in vivo hyperpolarization studies, we have developed an MR based metabolomics program to generate comprehensive metabolic profiles of cancerous and non-cancerous tissues in vitro. We are currently taking advantage of the extensive tissue repository at MD Anderson to develop MR metabolic fingerprinting in different cancer systems. 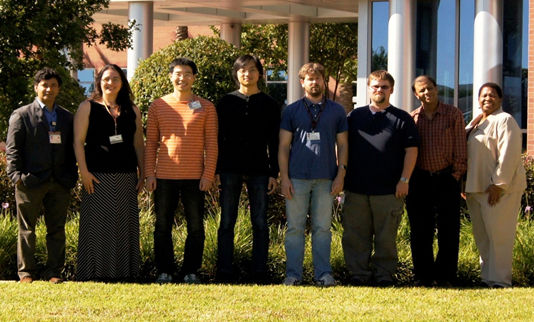